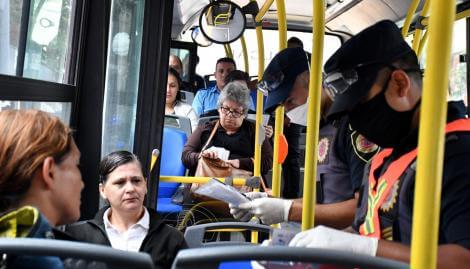 Among ideas to pass the coronavirus quarantine, applause for the health workers and virtual tasks for the boys, the first seven days passed of the isolation decreed by the Government that also left almost 9 thousand detainees, historical falls in the flow of vehicles and, in just 24 hours, 1, 5 million registered to collect Emergency Family Income.

While the barricades in the suburbs, which began in Ezeiza, began to multiply to prevent access to the parties, the federal security forces carried out strict controls on roads, routes and strategic points. The result: 318,094 delayed, 8315 arrested and, of the 295 thousand vehicles they controlled, they hijacked 1,087.

The City Police, for their part, detained 282 people and 1,325 were notified or transferred to their home.

The national and Buenos Aires governments placed special emphasis on access to the metropolitan area, since it is the area with the highest amount of vehicle flow and passenger mobility in the country. There were historical falls in subways, trains and buses, with a drop of over 90 percent compared to a typical day, amid restrictions due to the pandemic that has already left 17 people dead in the country.

“During the long weekend there were unprecedented values ​​with about 6,000 passengers per day on the subway. The train reduced the number of passengers by 90%, the collectives recorded decreases of 79% “, detailed a report by the City.

According to the document, the highways “are at their minimum values, since the vehicular flow touched peaks 89% lower than usual, which means that about 44,000 vehicles passed per day, when in normal days the circulation exceeds 400,000 cars “.

Delays caused by people who do not meet the requirements of the decree to circulate, forced the administration of Horacio Rodríguez Larreta to close 56 accesses. The 20 that were left open have an exclusive lane for Health workers.

One of the biggest concerns of isolation is microeconomics. Through ANSES, Alberto Fernández executed the creation of a subsidy of 10,000 pesos for those who will not have any income because of the quarantine. In one day, almost 1.5 million people signed up to be beneficiaries of the Emergency Family Income (IFE).

Meanwhile, health workers, linked to work against Covid-19, will receive a bonus of 5,000 pesos for the months of April, May, June, and July.

The same number will be received by the security forces in April, whose payroll, as recognized in a resolution by the Ministry of Security, is insufficient to carry out the tasks entrusted by the decree. They will solve it with the creation of a “reserve” of already retired troops.

The bonus will also be received members of the Armed Forces that they are affected by the planned operations to attend to the social, preventive and mandatory isolation measure established to mitigate the advance of the coronavirus in the country. The military were seen setting up field hospitals and bringing food to poor neighborhoods.

Everything seems to indicate that the isolation would not end on March 31, as planned. On the contrary, there is talk that it would continue, at least, until April 12. For this reason, the government deepened its food assistance strategy and gave active participation in this task to the mayors of the Buenos Aires suburbs.

With all the country’s borders closed, Fernández analyzes the implementation of new measures and the monitoring of other provisions.

Official sources pointed to Telam that there could be new measures over the weekend on rentals and home loans.

Regarding the reinforcement in food assistance, the Minister of Social Development, Daniel Arroyo, led a meeting with his counterpart from the Province of Buenos Aires, Fernanda Raverta, together with Buenos Aires mayors and leaders of social organizations, in which resolved to establish bases in municipalities to strengthen and streamline actions aimed at guaranteeing the most vulnerable “food and income for families” during the pandemic.

According to what was reported, for this purpose it was agreed “to establish local committees in the communes to define priorities and articulate actions between the different levels of government and the organizations.”

In parallel, it was also learned that the information sent by the National Directorate of Migrations to identify and locate people who have traveled abroad and that they can qualify as “suspicious cases” was made available by the Government of the Province to its municipalities so that they participate actively in the control.

The action plans are intended to serve close to “8 million people receiving food assistance” and to the “almost 3 million children and adolescents who eat in schools, canteens and picnic areas,” said sources in the social portfolio.

The President of the Nation ordered the creation of an inter-ministerial work table to assist Argentines abroad and plan their returns “gradually and safely” due to the expansion of the closure of borders, ports, airports and international crossings that began to take effect as of this Friday.

a new complaint has been filed in France

How much they will pay between Personal Assets and the Wealth...

Quarantine: How to ask for help in pharmacies if you are...

The Government set the conditions to access Repro II / Argentina...

What is the origin of the saying “get into a shirt...