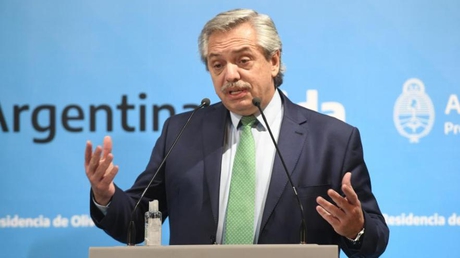 It would be until Monday, April 13, after Easter Sunday. However, no one at Casa Rosada dares to risk that date being the definitive

After completing seven days of compulsory isolation throughout the country, the Government is studying the initial result of the measure at this time and is preparing to announce the extension of the quarantine until after Easter.

With the concern of the economic impact that a prolonged isolation will have on his back, President Alberto Fernández keeps his eyes on prioritizing the health issue.

For this reason, the decree that extends the preventive and compulsory isolation that had been established in principle until March 31 is hurried.

The new key date will be Monday, April 13, after Easter Sunday.

However, no one at Casa Rosada is encouraged to risk that date being the definitive one, since the isolation could continue beyond the first half of April, although it is a decision that will be taken later.

Classes, meanwhile, do not have a return date and the possibility of the early winter break is getting stronger.

The Government’s efforts for these hours are focused on reducing the negative impact on the economy, put some money in the pockets of the most vulnerable sectors and guarantee food with direct assistance through the municipalities.

The main thing is to attend to the most urgent needs and contain eventual social discontent, especially in the hottest areas of the suburbs, they assure the ruling party.

To that he responds decree of need and urgency (DNU) that will freeze rents for 180 days, as well as mortgages and evictions, in addition to the $ 10,000 for monotributistas and informal workers.

Price control, which is not felt in most shops, is another of the legs of the official plan, and one of the demands of the opposition and social movements.

The main opposition blocks maintain their support for the official measures and understand that the quarantine must be extended, although every minute the demands to the Executive for greater controls and the warnings for the economic consequences grow.

This Friday, one of the sources of tension was the situation of the Argentines stranded abroad, after the government closed the borders completely and decided to suspend the repatriation flights.

Former President Mauricio Macri led that request and asked Fernández to “rescue” them.

In this regard, the Casa Rosada created an inter-ministerial table that will study one by one the cases of Argentines who have not been able to return to the country, to try a “safe” return, although for now without deadlines.