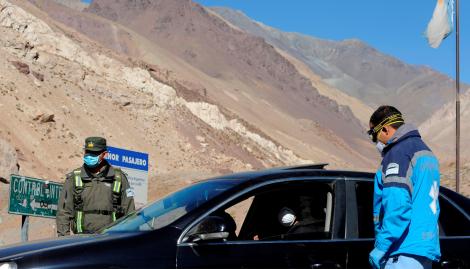 Those detained in the province of Mendoza for not complying with the mandatory isolation decreed by the Government, and who have no criminal record, they will have to do free work in hospitals, police stations or municipalities, as resolved by the local Justice.

Mendoza’s Attorney General, Alejandro Gullé, explained: “In cases where those accused of violating the quarantine do not appear as accused of something malicious or wanted, they will work free for the State ”.

For the rest, like those with a record, “there will be effective prison, with penalties ranging from six months to two years“

“I decided to analyze each case in particular and suspension of trial may be applied and the rule of conduct, with free work for the State, preferably in public hospitals or health centers, municipalities or schools in the distribution of meals or even in police stations and tax offices, ”said the chief prosecutor.

According to Gullé, 90% of 1,355 detainees are young people, aged 18 to 30 and in full working age, that if they are convicted, their possibility of working is in danger.

“They can even kick them out of their jobs, so we don’t want to generate antecedents and damages ”, he expanded.

A smiling Melania Trump reappears to receive her last Christmas at...

Isolation took away investment and spectators from notices on public roads

Three Rwandans arrested in Belgium on suspicion of taking part in...

20 years after his suicide, the farewell letter that still moves

Exchange houses are back in operation but will not sell dollars ...

Why it is not business to invest in Argentina, according to...

Point by point: what could be relaxed in the City after...