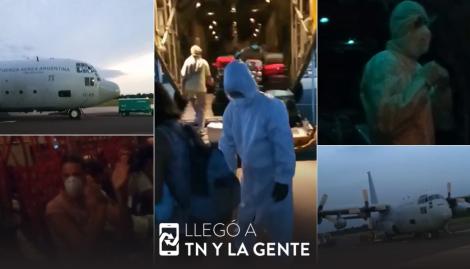 Some 116 Argentine tourists They arrived on Friday night at El Palomar Air Base in two military aircraft from the city of Puerto Iguazú, in Misiones, as part of the scheduled transfers due to the closure of borders due to the coronavirus.

On this occasion, an airplane was part of the humanitarian assistance operation Hercules C-130 with 66 passengers and a Fokker F28 with 50 passengers.

“We were very lucky, they told us they were the last flights,” he told TN.com.ar Moira, an Argentinean who was on vacation in Florianópolis when the coronavirus crisis broke out.

The woman first moved to San Pablo, where after spending four days at the airport between cancellations and rescheduling, she decided to take a bus to Foz de Iguazú with about 40 Argentines.

They were the last group authorized to cross the border, and they had to do it walking five kilometers with their suitcases on their backs. “A truck loaded with cement pipes crosses the route to prevent traffic,” he explained.

Before boarding the plane, they followed a complete medical examination protocol. “They were all in white, very angry,” said Moira. They took their temperature, looked at their eyes, and they disinfected them and their luggage before going up and coming down the Hercules.

On the flight there were from elderly people to families with boys. Some passengers came from Indonesia or South Korea and were stranded for several days in São Paulo. On board, the excitement among the passengers was palpable and there was loud applause upon landing at the Palomar.

Throughout the trip, a doctor observed them and asked them questions, said Moira, who highlighted the good treatment of the military.

Once in Argentina, they filled out an affidavit and went home to comply with the quarantine.

“I am happy to quarantine in my country and at home,” said Moira, relieved after a long journey to return. “Many Argentines were stranded in San Pablo and others in tents on the border,” he concluded.

The government’s decision to extend the closure of international borders, ports, airports and steps to contain the coronavirus pandemic was made official this Friday through Decree of Need and Urgency 313/2020.

Although the DNU establishes that the measure is valid until 24 March 31, in its text it clarifies that the expected period “may be expanded or abbreviated” by the Ministry of the Interior after intervention by the national health authority in accordance with the evolution of the epidemiological situation.

Chancellery estimates that there are still more than 10 thousand stranded Argentines in the world, that they will have to wait to be able to return to the country.

The decree orders “to take the pertinent measures in order to facilitate the attention of the basic needs of Argentine nationals or residents in the country who could not enter the national territory” due to the closure of borders.

Coronavirus: Córdoba reverses and restricts quarantine after the increase in cases

Coronavirus | The case of the young man who violated quarantine...

For the coronavirus, Aerolíneas Argentinas will pay the June salary in...