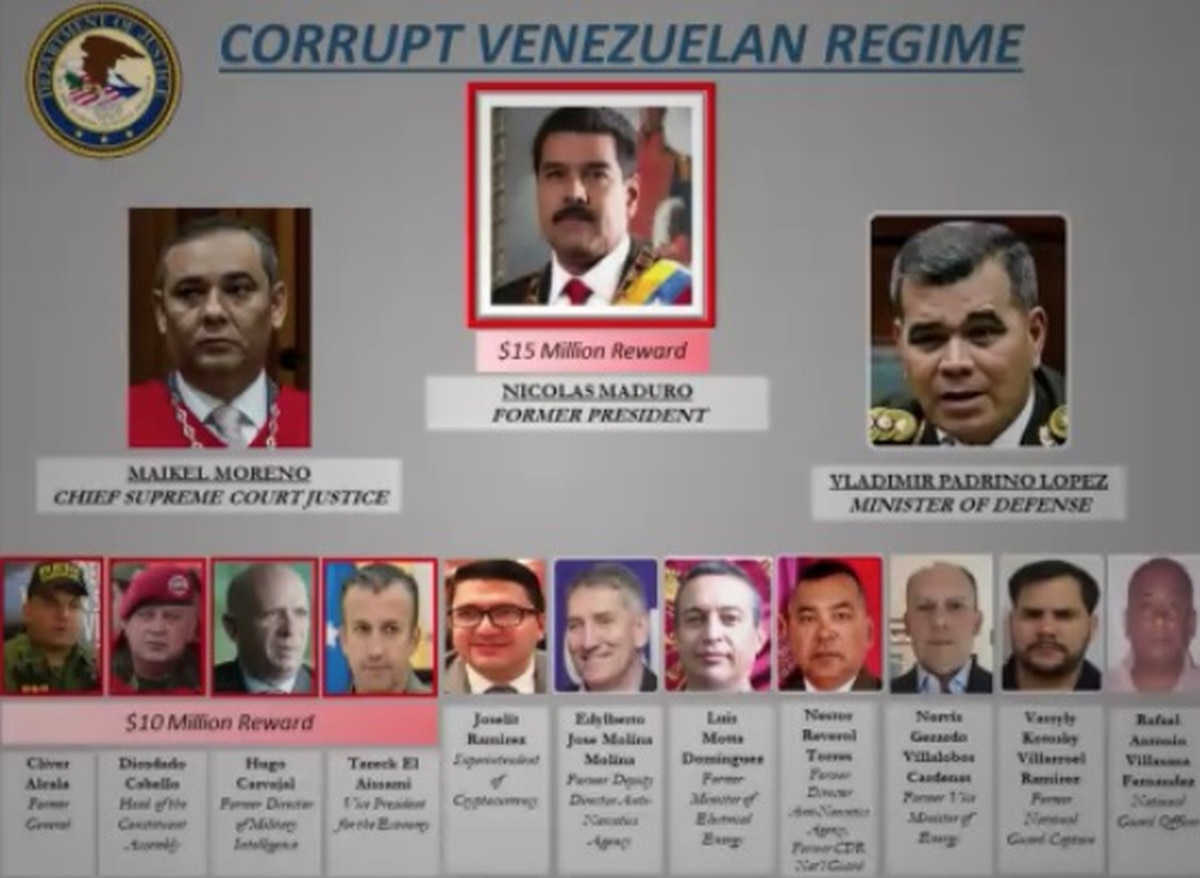 US officials have named Maduro as the leader of the drug trafficking organization Cartel de los Soles, which they said involved high-ranking politicians and members of the Venezuelan army and judiciary.

“While occupying key positions in the Maduro regime, these individuals violated public confidence by facilitating shipments of narcotics from Venezuela, including control of planes departing from a Venezuelan air base, as well as control of drug routes through the ports in Venezuela ”, the State Department wrote in a statement.

Pompeo’s announcement comes after The Justice Department will accuse the main figures of the dictatorship of drug terrorism this Thursday. The attorney general, William Barr, blamed the regime for plotting a conspiracy with the FARC to “Flood the United States with drugs” and he denounced that the border between Colombia and Venezuela has been taken by the dissent of the terrorist group under the protection of Maduro. Barr added that it is estimated that Between 200 and 250 metric tons of cocaine are sent out of Venezuela through the routes of the criminal alliance, equivalent to up to 30 million lethal doses. Barr also filed charges against former senior FARC officials, like the former peace negotiator of the former guerrilla Luciano Marín, alias “Iván Márquez”, And Seuxis Paucias Hernández, alias“Jesus Santrich”For collaborating with the Venezuelan dictator to traffic cocaine.

Among other Venezuelan officials also involved Maikel Moreno, President of the Supreme Court, and Vladimir Godfather, Defense Minister, as the main actors in the criminal scheme.

The government offer occurs under the State Department’s Narcotic Rewards Program (NRP), Pompeo indicated. More than 75 drug traffickers have been brought to justice under this program since it began in 1986. The State Department reported that it paid more than 130 million in rewards for information leading to those arrests.

“The Venezuelan people deserve a transparent, responsible, and representative government that meets the needs of the people and that does not betray the confidence of the people by forgiving or employing public officials who are dedicated to the illicit traffic in narcotics,” added the statement. “The United States is committed to helping the Venezuelan people restore their democracy through free and fair presidential elections that will provide them with honest and competent national leadership.”

The State Department repeatedly stated its accusations against Chavismo’s alleged criminal activities. Last July, Washington included The Aissami on your list most wanted for playing “a significant role in international drug trafficking.” The Maduro official is also under investigation for his ties to the Hezbollah terror group.

Too UN analyzed the infiltration of drug trafficking and the Cartel of the Suns in the regime. “There are indications that criminal groups in the Bolivarian Republic of Venezuela have managed to infiltrate government security forces and have created an informal network known as the ‘Cartel of the Suns“To facilitate the entry and exit of illegal drugs,” said the International Narcotics Control Board (INCB) in its annual report released in February.

Mature, successor to Hugo Chávez in 2013, he was reelected for a second term in 2018 after an opposition boycott, who rejected the results because they considered them fraudulent, as did a good part of the international community.

The United States, like almost 60 other countries, support Venezuelan opposition leader Juan Guaidó, President of the National Assembly (Parliament), who since January 2019 has been recognized as interim president.

Since then, Donald Trump’s government pushes for Maduro’s exit from power, with a battery of economic sanctions. But Maduro retains the support of China, Russia, and Cuba.