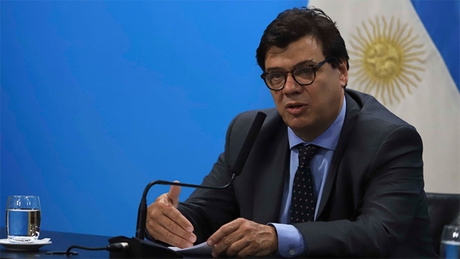 The Labor Minister, Claudio Moroni, affirmed that the payment of the extraordinary bonus of 10,000 pesos that was announced Monday Tuesday for monotributistas and informal workers “the social isolation ordered by the national government to mitigate the spread of the coronavirus will be repeated as many times as necessary”.

The official clarified that said bond “is compatible with the Universal Child Allowance, so those who collect that allowance will also be able to receive this 10,000 peso bonus.”

“The measure aims for families of informal, independent workers and monotributistas of the lowest categories (A and B) who only live on that single income, receive this bonus that will be an extraordinary income,” said the head of the portfolio labor.

On when the beneficiaries will be able to collect the bond, Moroni stated: “It will be charged during the month of April because this will require registration through an Anses site or application, which will be launching these days. “

“With the data in the Anses and the intersection of information, what we are going to verify is that the monotributista does not receive another salary in relation to dependency or that the informal worker does not have someone in his close family circle who has a good income,” .

Regarding the continuity of the bond, Moraoni announced that “it will be repeated as many times as necessary while this situation lasts.”

When asked about the elimination of double compensation in June as provided by law, the head of the Labor portfolio warned that “the situation will be seen at that time since it is clear that the scenario is different, although for now we are not seeing massive layoffs. “

Regarding the REPRO program to help companies cover the payment of their workers’ wages, Moroni said that “for now, very few companies have asked for it” and clarified that those that did “had been wrong since last year “

In as much, it considered that “in these crises there will be some sectors very affected, others somewhat affected and other sectors that are working very well like the food sector.”

“For the most affected, we are going to quickly put together a scheme to contain a group of its employees through the REPRO or another program that we are designing. Later we will see what we do with large companies,” he said.

“We are taking all appropriate measures so that the population is affected as little as possible by the pandemic,” the minister concluded.

this is the new plan / Argentina News

“Telenoche”: they rented, they lost their jobs and now they take...

In India, the leader in meal delivery introduces ten days of...

Kodak reinvents itself and its actions multiply: now it will produce...

The cost of production in Argentina increased in pesos, but fell...

Another tax reform; for what?

80 kilos of methamphetamine and cocaine seized at two Texas border...