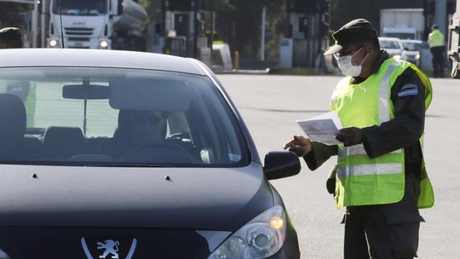 The figures stem from operations carried out by federal forces since compulsory isolation began. In addition, they hijacked 543 vehicles

More than 1,200 people have been detained by federal security forces across the country since preventive and mandatory social isolation was decreed by the coronavirus pandemic, while more than 20,000 were delayed and notified to carry out quarantine at their homes.

The figures released arise from the operations implemented by the four forces that respond to the portfolio commanded by Sabina Frederic between Friday 20, when the total quarantine was decreed, until this Tuesday.

While, another 20,403 people were apprehended, that is, they were delayed for control and notified to return to their homes.

The sources explained that in all cases the judges and prosecutors on duty were informed, who decided whether the person should be notified and compelled to return to the home of origin to comply with the quarantine ordered or to be detained and subject to a case. judicial.

Regarding the vehicle inspection, 543 cars were seized as far as isolation is concerned: 302 by members of the PFA; 161 of the GNA; 55 from the PNA and 25 from the PSA.

Finally, the spokesmen reported that until 8 this morning 81,006 vehicles were controlled.

The numbers of detainees and vehicle hijackings do not include the results of the procedures carried out by each of the provincial police, so the amounts could double., as explained yesterday to Télam the Secretary of Security of the Nation, Eduardo Villalba.

what is the price on wednesday, november 25 / Argentina News

have accounts for the repatriation of FUNDS / Argentina News

Britney Spears called for a redistribution of wealth and was called...

In Spain, the lack of doctors complicates the fight against Covid-19

Kinshasa announces the end of the eleventh Ebola epidemic in the...

Coronavirus | Santa Fe prohibits entry to those who do not...

agreement with the IMF and DOLLAR price / Argentina News

The request of Pope Francis for the civil union law and...