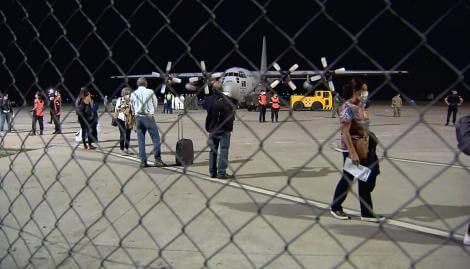 This Sunday night, two Hercules C-130 planes landed at El Palomar Air Base and were received by Defense Minister Agustín Rossi. On board 140 arrived Argentines they had been stranded In Lima city, Peru, after the closure of borders that was decreed in the midst of a pandemic of coronavirus.

As reported by the Ministry of Defense, the mission, considered as “humanitarian assistance”, brought the country to the Argentines aboard two Air Force planes.

The flights, which arrived a few minutes apart, at 20:28 and 20:50, they brought 70 passengers each, and were received by Rossi; the chief of staff of the Air Force, Xavier Isaac, and the head of the Joint Chiefs of Staff, Juan Martín Paleo.

They transferred to the Esteros del Iberá specimens of an extinct...

Game of Thrones actor confirmed he has coronavirus

Despite its cost, the Israeli government tightens containment

why gas sets the Mediterranean on fire

In full quarantine, they performed a wedding with more than a...

Pfizer or Moderna cannot be sued for bad effects / Argentina...

Working in the coronavirus line of fire: what doctors are like...

It will hire 2,500 employees and pay good wages: star sector