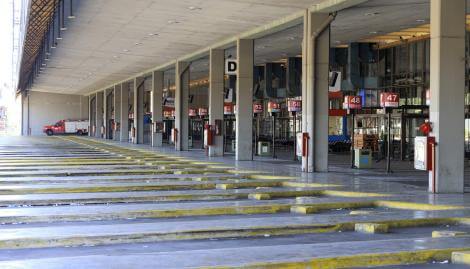 Six people were detained at the Rosario Bus Terminal for violating the mandatory quarantine to limit the spread of coronavirus, when they arrived in two buses from Brazil but with a sign that said “Mar del Plata”, in order to avoid fourteen-day isolation.

These are two micro drivers, two coordinators and two passengers, who will now be charged with the crimes provided for in articles 202, 205 and 239 of the Penal Code. for violating measures taken to mitigate the spread of the pandemic.

It all started when the Santa Fe health and safety authorities wanted to control two buses belonging to the Calchaquí SRL company, whose signs – which are displayed on the windshields – said they came from Mar del Plata.

There they found that actually the true origin of the collectives was Brazil, and that they had placed the other announcements to avoid falling into mandatory isolation because they came from one of the countries considered at risk.

Upon realizing the deception, the police guard and municipal employees of the terminal reported to the provincial Ministry of Security. Portfolio staff activated the surveillance protocol against the epidemic, alerting Rosario’s special prosecutor, Gustavo Ponce.

Alerted by station personnel, the Police stopped the two buses as they were leaving the city.

When returning to the terminal, the public prosecutor Ponce and the undersecretary of Preventive Security of the province, Diego Llumá, ordered the arrest of the drivers and two brothers (a man and a woman), coordinators of tourist groups.

Hours later two passengers were detained in Casilda who managed to escape from the police control and were also charged in the case.

Furthermore, before arriving in Rosario, the buses dropped off passengers in Paraná and Santa Fe, which have already been identified.

Artificial intelligence already predicts who will die from coronavirus / Argentina...

Rosario: a hospital gurney who was not in contact with infected...

WHO recommended not to use remdesivir for coronavirus / Argentina News

The US demanded that governments and companies not help Iran send...