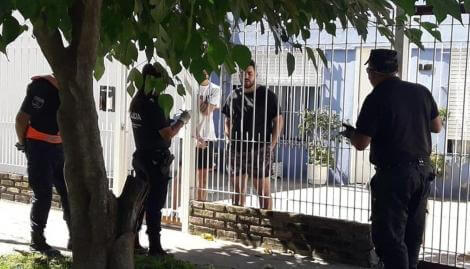 Far from the provisions of the Government, a 24-year-old man who returned to the country from the United States did not comply with the mandatory quarantine and attended a party with 120 other guests in the municipality of Moreno. Finally, it was confirmed that you have coronavirus

Later, it was known that 10 people who attended the celebration presented the symptoms and collapsed in the hospital. The authorities trace other contacts of the infected to take the necessary measures.

Judicial sources confirmed to TN.com.ar that the Federal Justice investigates the case and the municipality will promote a criminal complaint for the violation of quarantine, a crime that can involve from 15 days to 2 years in prison.

According to the latest epidemiological report from the Buenos Aires municipality, the man, 24, returned from abroad to Argentina on March 13.

Doctors from the Mariano and Luciano de la Vega de Moreno hospital assured that they do not have the resources to care for the 10 patients who were in contact and who could have contracted the virus.

The Buenos Aires Minister of Health, Daniel Gollán, stated that They will send reinforcements and supplies to face the situation.

After presenting the symptoms compatible with the disease and confirming the positive, the young man was hospitalized in solitary conditions in a health center in the City of Buenos Aires.

“The patient is in solitary confinement in an institution in CABA. Travel routes and case contacts are being tracked to take the necessary measures of epidemiological blockade, isolation and corresponding assistance if necessary, “explained the municipal authorities.

The patient, who is in good health, It is the second in the municipality to contract the disease. The first confirmed case in Moreno had arrived in Argentina on March 14 from the United States and a day later he presented symptoms.

The young woman was referred, first, to the Mariano and Luciano de la Vega Hospital and later to a Private Clinic. It is currently in good condition. His direct contacts are in isolation and in follow-up from the Epidemiological Surveillance Program, the municipality reported. None had symptoms so far.

What is the price of the DOLAR BLUE TODAY, Tuesday June...

They prepare a law to attract more mining companies / Argentina...

“Postal voting is the Democrats’ best weapon to defeat Trumpism”

Clothing imports fell 28% in November and new drops are expected

With a Lionel Messi goal, Barcelona beats Leganés at the Camp...

Fires continue in the Paraná Delta and the mayor of Rosario...