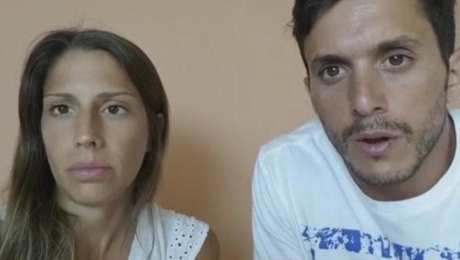 The airline traded them a flight to New Zealand for one to Los Angeles, but they do not have a visa to enter the United States. Papeete Airport closes

Matías and Florencia went to Tahiti for their honeymoon, but the coronavirus pandemic interrupted the moment. As in Argentina, the authorities ordered a quarantine this Friday and from Sunday they will close the airport. They could be trapped indefinitely on this remote South Pacific island.

“Hello we are Matías and Florencia, we are in Tahiti. Tomorrow we had a flight to return to Buenos Aires via Auckland (in New Zealand), but LATAM or Despegar without our consent changed this route and now we are going via Los Angeles (in the United States) “Matías Serini said in a video that his brother shared on Instagram.

The problem is that he does not have a visa to enter the United States and the Foreign Ministry still has not given him any solution.

“We are officially stranded because we do not have any specific flight or resolution to board a plane and return to Argentina. The options that are available to leave here until tomorrow, when the airport closes, are to cities where they ask for a visa or have already closed their borders for passengers in transit, “Serini told the TN.com.ar site from Papeete.

On Friday, Matías turned 31 years old. But instead of celebrating, he kept trying to solve the difficult situation they are going through with his 29-year-old wife. According to what he said, they have not slept for three days.

“On Monday all hotels in Tahiti close, so we have to go out and look for an apartment or a house where we can stay,” said the young man from Buenos Aires.

“In addition to that, the curfew was decreed, so to go out you have to go out with a justification, a form that the police ask you for,” he added.

The couple are waiting for a flight that will bring them back but they are aware that this may take a long time.

“The government of French Polynesia is putting together a list of all the stranded tourists to organize flights to repatriate them. But they did not tell us when or how they are going to do these flights. The picture is quite confusing and with nothing in sight. It seems that we are leaving to have to stay on the island for a while, “he concluded.

In Istanbul, great concern of the last Orthodox Christians after the...

digitize the bank in a human key

barrage of parents will switch children to public school

Former Mexican defense minister indicted in US for drug trafficking

Farewell to Gerardo Juárez, lawyer and former president of the Industrial...

They will allow the entry of tourists from neighboring countries: they...

In Córdoba, the sale of properties in April had the greatest...

AUTOCINES open throughout the country: this is how they work

Kodak reinvents itself and its actions multiply: now it will produce...