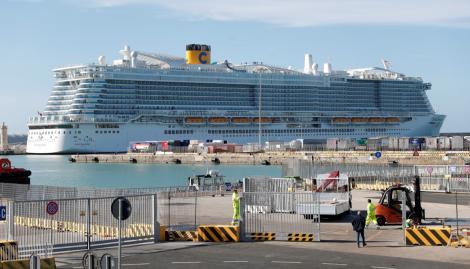 What should have been a vacation trip turned into an odyssey full of obstacles. Around 3,000 Argentine, Brazilian and Uruguayan passengers departed on March 3 on a Pacific Coast cruise bound for Barcelona. But due to the coronavirus crisis and after the closure of ports in Europe, they were practically adrift. Now the plan is landing in Genoa, Italy, and then return to their countries. However, the people on board claimed that they still do not have their tickets back and refuse to remain in a risk zone. “The climate here above is of total uncertainty”, they related to TN.com.ar.

The Pacific Coast cruise ship has a capacity of 3,780 passengers and 1,100 crew. On March 3 he left from Buenos Aires with final destination Genoa, Italy. He had to make stops in Rio de Janeiro, Salvador de Bahía and Maceió (Brazil); in Tenerife and Barcelona (Spain); and in Marseille (France).

Back then, the situation was different: Europe had not yet become a “risk zone” for Covid-19. Now, the number of dead and infected in those countries forced the authorities to take more drastic measures, including the closure of ports.

The plan changed on the fly. This Thursday the French authorities did not allow them to disembark in Marseille and, given the refusal, the ship’s captain decided that the destination of the cruise will be Genoa.

“In Marseilles, they only let the French go down and, according to the captain’s latest statement, the rest of us are going to Genoa,” Luisa Tartaglia, a passenger, explained in dialogue with this newspaper. The cruise authorities told them that they will make a sanitary cord there and they will be repatriated. But most doubt: “Will there be enough planes to transport us all?”

The passengers, many of them of legal age, are afraid of being stranded in Genoa, one of the areas most affected by the coronavirus.

“I am 74 years old, a pacemaker and five stents. For me, Genoa is the least desired destination,” Héctor Tatarsky, who is on board the Pacific Coast, told this media outlet. “I showed them my disability certificate, but these people don’t understand anything. They promise to take care of our health, but they don’t give us answers “, added.

Given the lack of answers, the relatives gathered to try to calm the uncertainty. “While they are on the boat there is no problem because there is no case, but we we don’t want them to get off in Genoa “, said María Marta Avogadro, who closely follows the news because her parents, cruise passengers. “The word promise to deliver the tickets has been since last Sunday, but it has not yet passed,” said Virginia Merluzzi, a relative of three other tourists.

Above the cruise ship, they assure that the climate is of total uncertainty. The tension between authorities and passengers increases every day. They still do not have return tickets or know where they would stay if they could not return to the country immediately. In addition, they denounced that they do not take their temperature daily and that, in case of presenting symptoms, they must pay to make a consultation in the infirmary.

“I know that when I go down I am adrift. I don’t want to disembark if they don’t assemble a sanitary cord and give us a ticket with the flight number, “said one of the passengers.

For its part, the company issued a statement a week ago in which they explained that the cruises currently underway would arrive in Italian ports only to allow guests to disembark and return to their homes. However, passengers aboard the Pacific Coast assure that even they do not have specificities about their return to the country.

The American flag lowered at the United States consulate in Chengdu

Last night the moon turned red, but it was not an...

How much will telecom prices increase? / Argentina News

Alfredo Zepeda at REINNOVA: the return to the origin of companies

Alberto Fernández will announce the extension of the quarantine until May...

Edward VIII and Wallis Simpson, a marriage operated by the British...

47% of Argentines are poor, beyond their income / Argentina News

They confirmed the sentence to the Rio Negro doctor who did...