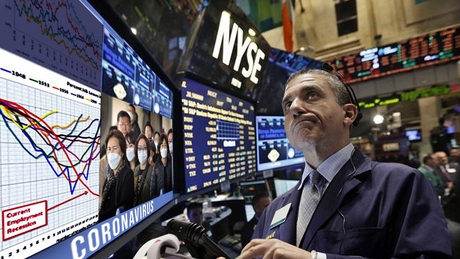 The indicator prepared by JP Morgan took a new jump at the beginning of the week, dragged down by the collapse of global markets

In what appears to be another black day for the markets, Argentina’s country risk shoots up above 3,300 points.

After a small decrease registered last Friday, the index prepared by JP Morgan jumped at the beginning of the week to 3,336 units, dragged down by the collapse in the markets of Asia and Europe, while the operations prior to the opening of Wall Street They push the major indices down 5%.

In this way, the world stock indicators fell again strongly on Monday despite the stimulus measures that the central countries are announcing and the price of crude oil dropped again, reaching around $ 30.

The North Sea barrel of Brent for delivery in May – a benchmark for the Argentine production market – stood at $ 30.53 in London, posting a 9.81% drop compared to Friday’s close.

The fall in European shares comes after Asian stocks also closed with losses, in some cases strong, such as Shanghai (-3.4%) and Hong Kong (-4.03%).

The Tokyo Stock Exchange closed with a 2.46% drop in the Nikkei, its main indicator, after the Japanese central bank announced new stimulus measures to calm the markets and mitigate the impact of the coronavirus. The agency announced to keep the reference interest rate at the same level but has expanded the purchase of bonds and other instruments and has created a new line of financing for companies.

The measures of the Bank of Japan come at the beginning of a week considered key for world markets after record falls in recent days, including those of the Tokyo parquet, which closed on Friday with a setback of 6%.

The evolution Nikkei points out that the actions of the Fed and the Japanese central bank are still not enough to restore calm to the markets, as investors expect coordinated and more forceful actions in the appointments scheduled in the coming days from the leaders of the G7 and the Eurogroup, among others.

The technology and telecommunications group Softbank monopolized the highest volume of operations and ended with a decrease of 2.49%, followed by the technology conglomerate Sony, which lost 3.06%.

Shares of Toyota, the Japanese motor leader and another of the companies with the largest market capitalization, also fell 2.35%.

On its side, the Australian stock market sank 9.7%, registering a historical drop.

The most important setbacks were recorded by the Collins Foods food chain, which fell 22.48 percent, in addition to the Star Entertainment casino chain (-20.91%) and the travel agency Wetjet (-20.04%) .

The collapse, greater than that registered last Thursday and after a day of relief on Friday, also occurs despite the announcement by the Australian Reserve Bank to buy government bonds in secondary markets and plans to ensure the liquidity of markets, among other measures.

Brent’s barrel fell more than 9% on Monday, reaching its lowest level in four years, due to the imbalance caused by an abundant supply of crude oil and a demand that decreases as a consequence of the coronavirus pandemic.

North Sea oil, a benchmark in Europe, has suffered sharp falls in recent weeks due to investors’ fear of a sharp drop in demand due to restrictions on movement, flights and productive and business activities as a result of the pandemic of the coronavirus and before the price war started by Saudi Arabia.

Last week, black gold prices plummeted on the Saudi decision, the world’s largest crude oil producer, to lower the price of its exports, and the COVID-19 pandemic.

OPEC estimates that this year the total demand for crude oil will not exceed, as it had calculated, the psychological barrier of 100 million barrels per day, but will remain at an average of 99.73 million, provided that the world as soon as possible crisis possible because of the coronavirus crisis.