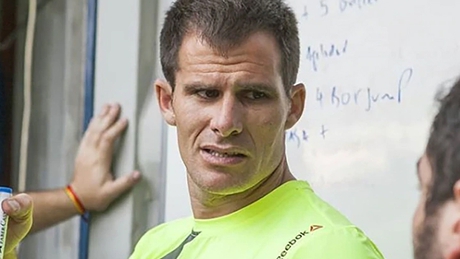 Miguel Angel Paz, 40, was detained at his home and was forced to remain in quarantine after attacking the building security guard.

Amid the shock of the spread of the coronavirus in Argentina and the world, a man attempted to violate the quarantine after returning from a trip to the United States and He beat the building security guard who had warned him for his irresponsible attitude.

The scene, which occurred in an Olivos building and recorded by security cameras, was even condemned by President Alberto Fernández himself.

“We did not know if it was a fake news or if it was true. That is why I wrote to the person who uploaded the tweet by direct message at 1 in the morning. Apparently, a complaint was made at the Vicente López police station. the morning with Wado looking for the data and I hope to have it in a while, “said the president in dialogue with Radio 10. And he completed:”That man is going to pay the consequences of what he has done. Beyond injuries, that man is a true irresponsible. “

According to the municipality of Vicente Lopez, the violent episode occurred on Saturday night in a building on Leonardo Rosales street at 2700. In the images you can see how the aggressor, identified as Miguel Ángel Paz, begins to rebuke the security guard , named Gustavo Granucci, for trying to stop him when he wanted to go outside.

“Are you threatening me? You told me you were going to fine me,” said the assailant to the custodian, in an intimidating tone. “I got out of the guard. You are not complying with the sanitation protocol,” the security replied and pushed him out of the cabin.

It was then that the man reacted violently and began to hit the guard, who only managed to turn around and cover his face. “I’m going to kill you, “said the attacker amid insults.

Before the 911 call of the victim, SAME patrol cars and ambulances arrived. Maintaining the protocol established by the Municipality, both people were isolated. The agent was also transferred to the Houssay Municipal Hospital, while Paz was placed in a household quarantine.

According to the sources consulted, the Police of the Province also consigned a patrol at the home to respond to a new breach of breaking the quarantine by Paz.

Who is Miguel Angel Paz?

The 40-year-old man who was detained at his home and was forced to remain in quarantine spent most of his professional life related to sports.

After a season as a bank clerk, production assistant in an advertising company and in a textile merchandise and gift company, at the age of 25 he began in the world of sports.

He was coordinator of adventure races, activity during which he was hired for events organized by some of the most important brands of sports clothing.

Then, already in 2010, the University Club of Buenos Aires (CUBA) landed. There he served for six years as the physical trainer of the top squad and youth category.

Specialist in the “Pose Method Running” technique and once he left his job as a CUBA physical trainer, Paz devoted himself fully to the activity as a personal trainer and physical education teacher.

He stood out as a Crossfit and Crossfit Endurance trainer and taught countless trainings in public and private institutions. This experience allowed him to participate in the CUBA club’s “Prevention Guide for Youth Rugby Players”.

Over the last seven years, Paz formed the company Atletas Pro, where it aimed to improve physical performance through “analysis and training of posture, mobility and structural strength to improve mechanical efficiency and avoid injuries “, as it says in the official page of the company in the social networks.

Gustavo Grobocopatel resigned from his company and will live in Uruguay

Government will cut aid to pay salaries to companies

Paraguay closes bridge with Brazil for transit of people due to...

Coronavirus | In photos, how is the street 30 days after...

What kind of person are you? / Argentina News

They cut the highway that connects Córdoba with Villa Carlos Paz...