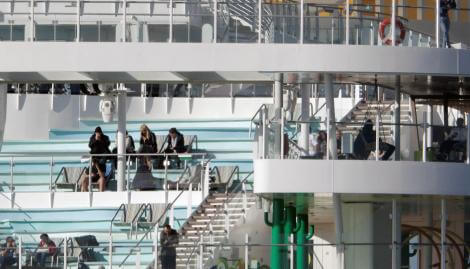 More than 3,500 passengers aboard a Costa cruise ship they assure that they do not know where they are taking them. They left Buenos Aires for Genoa, but in between, the Italian authorities decided to close the ports because of the coronavirus pandemic. Among the people traveling, none had symptoms compatible with Covid-19 and they are afraid that they will be forced to land in a risk zone. “We want them to return us safe and sound”, they expressed to TN.com.ar.

On March 3 the Pacific Coast departed for Buenos Aires to Genoa. Back then, the situation was different: Europe had not yet become a “risk zone” for Covid-19. Now, the number of dead and infected in those countries forced the authorities to take more drastic measures, including the closure of ports.

The passengers of the cruise, among which there are around 2000 Argentines, are desperate: they don’t know where they are taking them. Luisa, one of the people on board, spoke to TN.com.ar and he assured that nobody gave them information about his landing place.

“Up here we are all healthy and we are afraid that they will lower us into a risk zone and someone gets it, “said the woman.

Passengers are constantly meeting to discuss the situation and try to calm the panic that is generated above the ship before the lack of information. It is that there are older people on board and they fear that they will be forced to remain in quarantine in a country of risk.

“The captain does not show his face, we do not know where he is going to take us,” they said desperately.

“We propose that they take us back to Buenos Aires to take shelter there. We want them to return us safe and sound, “they assured this newspaper.

For its part, the company issued a statement on Friday in which it announced that it will suspend all its trips in the world until April 3, as a precaution against the expansion of the coronavirus. As they explained, the cruises currently underway will finish their current itinerary only to allow customers to disembark and return to their homes. In addition, the company promised to reimburse the money to the affected passengers.