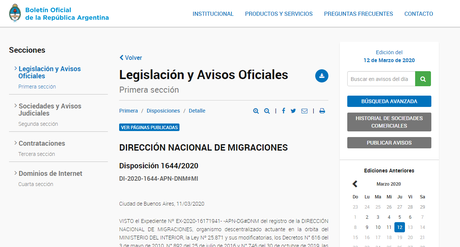 The measure was published this Thursday in the Official Gazette of the Nation, where the National Directorate of Migration explains the reasons

The spread of the coronavirus in the world is a topic that is increasingly talked about. Day after day, the countries communicate measures that they are going to take in relation to this new strain of the virus, with the aim of preventing massive contagion and preventing an increase in infected patients and the deaths as a consequence.

In that context, eThis Thursday Argentina temporarily suspended the “processing of applications for admission as a” temporary resident “of foreigners who are abroad and are national and / or coming” from some countries that are among the most affected by the coronavirus. China, South Korea, Iran, Japan, the United States, the United Kingdom -England, Scotland, Wales and Northern Ireland-, and the states of the European Union are the nations that are reached by this measure. In addition, provision 1644/2020 also refers to the countries that make up the Schengen area.

It is important to keep in mind that the people reached by this measure are those found in the following subcategories, established by article 23 of Law No. 25,871 and its amendments: migrant worker, rentier, pensioner, investor, scientists and specialized personnel , athletes, artists, religious of officially recognized cults, academics and students.

Likewise, the transitory residencies for academics coming from the mentioned countries were temporarily suspended.

It is important to remember that after the declaration of a coronavirus pandemic by the World Health Organization (WHO), the Argentine Government had taken a series of precautionary measures and action in relation to this pathology.

Thus, last Wednesday a budget reinforcement of $ 1.7 billion was announced, the mandatory quarantine for people who traveled to the countries most affected by the advance of the coronavirus and a sentence of up to 15 years in prison and up to 100,000 pesos for those who did not comply with the provisions of the authorities.

At the same time, controls at Ezeiza International Airport increased and Aerolineas Argentinas announced the cancellation of all flights from Rome, Miami and Orlando.

Thousands of companies want to pay AGUINALDO in installments: can they?

For Alberto Fernández, lowering wages “would be a demagogic act”

Zulemita Menem: “Pray for my dad”

Alberto Fernández anticipated that he wants to review the functioning of...

AFIP will investigate those who request tax residence in Uruguay

The Pompidou reopens after the pandemic with Christo’s “cursed” exhibition